On Wednesday, April 6, my tour group traveled from Angers to Sarlat, France, with a stop at Oradour-sur-Glane. As I walked the deserted streets of this devastated village, I was taken back to September 11, 2001.

I was in New York City that day, having stayed overnight for work. I walked out of the apartment building on the east side a little before 9:00 a.m., planning to walk to Chinatown. I remember looking up at the sky and thinking, “what a beautiful day for a walk.” I didn’t know a plane had already crashed into the World Trade Center; I learned that one minute later when I walked across the street and into the office.

Life changed in those few minutes.

On June 10, 1944, life in Oradour-sur-Glane changed for the village’s residents. I could imagine the residents waking up that morning thinking it was like any other morning, and then some 200 Nazi’s surrounded their village and massacred the residents and destroyed the buildings. Only one woman survived.

The village has been left as it was that day, a memorial to the massacre.

Later that day, I heard about atrocities in Ukraine and thought of the people there who had woken up one day in February not knowing their lives would never be the same.

The stop in Oradour-sur-Glane was sobering, and for the next few days, my mind was preoccupied with the evil in the world—past and present.

I allowed myself to feel the sadness for the people of Oradour-sur-Glane and the people of Ukraine—and for myself. In the middle of this wonderful, month-long trip to Europe, I held deep gratitude for this opportunity to see and learn.

I recognized the parallels in France’s life-altering events and my own, and I came to a deeper understanding of the need to honor my past, no matter how painful it might have been.

Walking the deserted streets of Oradour-sur-Glane reminded me to look at my past realistically and to acknowledge what happened to me. I remembered three questions from a grief retreat I attended: What was lost? What remains? What is possible?

I love to read novels and mysteries. Last month, I read American Dirt by Jeanine Cummins. I had requested it from the library before the pandemic, and when it finally came in and I started to read it, I found the subject matter quite difficult.

American Dirt tells the story of a woman and her son fleeing a Mexican drug cartel and joining other migrants coming to the United States. It is a harrowing story of riding atop trains, making snap decisions about whom to trust and the deep desire to stay alive.

Then another book I had requested before the pandemic was ready for pick up at the library—The Nightingale by Kristin Hannah. A few pages into this book, I realized it was about a family in France during World War II.

Normally, I like to read books about that era because they remind me of how evil can take root and grow in a society.

But my life feels heavy enough right now, and once I realized the subject matter of this book, I was tempted to stop reading. But I didn’t because I think it is important to remember what people have endured, how they survived, and how some can even thrive after enduring horrific atrocities.

The Nightingale tells of two sisters, each facing the invasion of France in her own way—the younger sister joins the resistance movement while the older sister remains in her home waiting for her husband to return from the front. Her home is sequestered, and her life becomes one of daily challenges for food and safety.

Although I was resistant to reading about the difficulties of these life situations, these books were just what I needed to read during this time when my usual routines have been interrupted. There have been times when the grocery store shelves were fairly empty, but that inconvenience lasted a few weeks—not the four years of the German occupation of France.

The requirement to keep social distance and to wear a mask can feel arbitrary because the virus is an unseen enemy. I would know to hide from an invading army driving tanks through our streets and not complain that I was being inconvenienced by having to stay inside if I saw my neighbors dragged from their homes and shot.

These books remind me that most of my challenges are really inconveniences that can be managed. Torture, starvation, and other atrocities of war are real problems. I am grateful that I have not had to face those kinds of trials.

I will gladly stay home or wear a mask to stay safe.

My recent vacation in Ireland included a day trip to the Peace Wall in Belfast. It was a sobering experience that brought up many memories and emotions.

The Peace Wall runs between two neighborhoods and has gates across the streets. The gates were all closed and locked the Sunday we visited.

We walked along Falls Road, looking at murals that commemorate the troubles in Northern Ireland—and also murals that depict troubles in other countries—oppression around the world.

Shortly before I left for Ireland we had marked the fiftieth anniversary of the Detroit riot. I was fifteen at the time of the riot, and I have vivid memories of that week in July 1967.

Some people are now calling the riot a rebellion or uprising, and while I understand their reasoning, I feel resistant to change. After the riot, my parents moved us out of Detroit, and riot captures my experience and the aftermath of upheaval in my life.

I had watched the documentary, 12th and Clairmount, that places the riot in a broader historical context, which was helpful for me. It also stirred up memories and emotions. 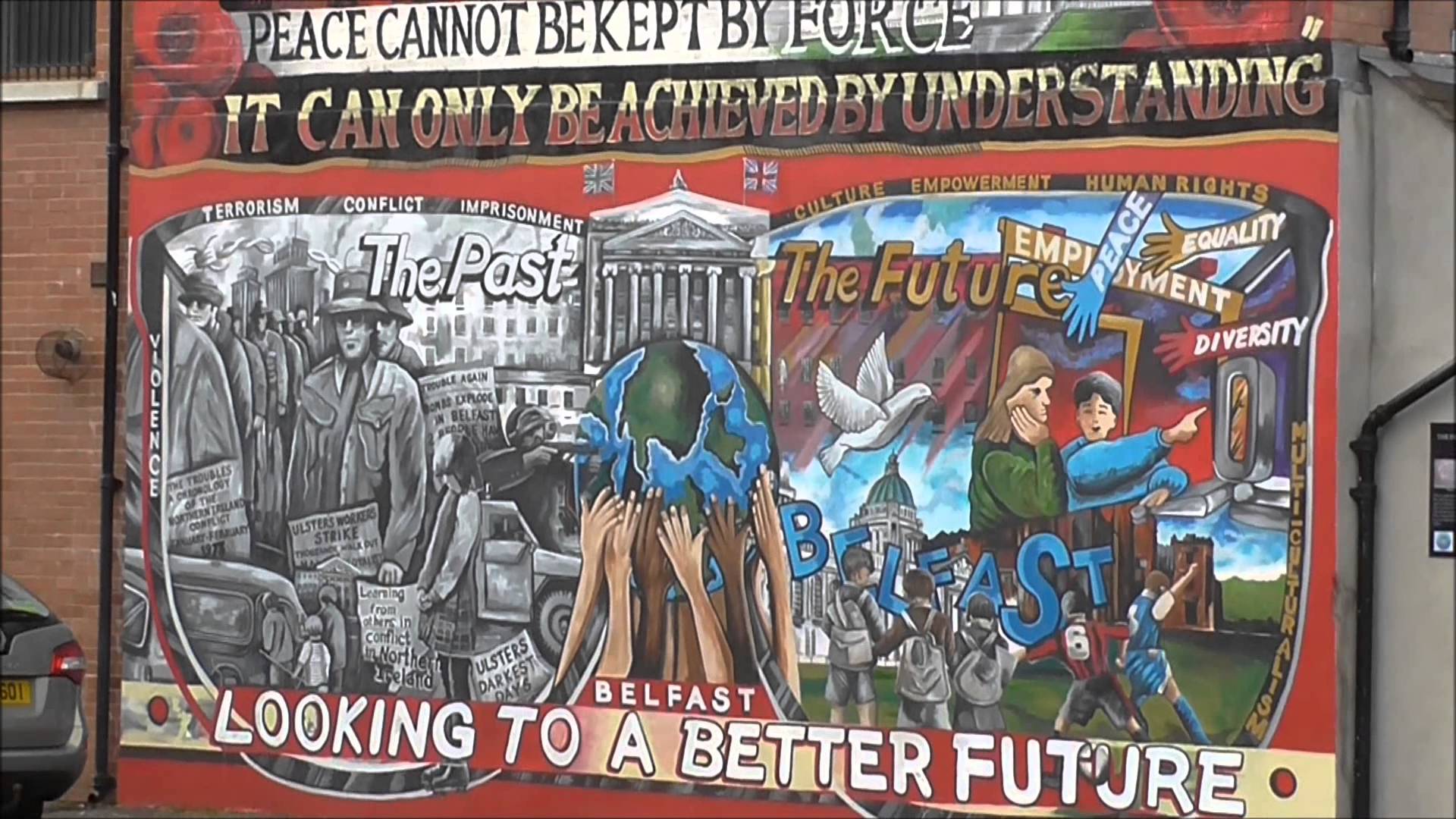 Three years after the Detroit riot, I moved to Norfolk, VA, and I was unprepared for the reception I received.

More than once, white southerners told me to “Go home,” once my accent revealed that I was not from there, that I was a Yankee.

White southerners talked about “the war,” and it took me a while to remember that they were as likely to be talking about the Civil War as the Vietnam War. My protestations that my ancestors did not even come to the U.S. until the early twentieth century made no difference. I was a Yankee; therefore, I was somehow responsible for the Civil War.

Gobsmacked is the word I remember using to describe the experience. Over and over again, I encountered a hatred aimed at me because of where I had lived.

How could people hold onto something that happened more than a hundred years earlier? How could keeping Civil War hatred alive be helpful?

The wall in Belfast brought back that “we will not forget…” sentiment.

And that brought up my own I will not forget attitude. I can see that my resistance to look at the events and aftermath of July 1967 is similar to the white southerners who held on to anger about the civil war. I, too, nurse my grudge.

Looking at the Peace Wall and murals, I felt invited to let go of my anger and resentment, to be more compassionate toward the white southerners who had despised me and the Detroiters who changed my life. I felt invited to move past my resistance and onto the path toward reconciliation and peace. 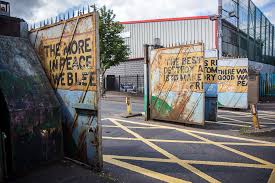 I grew up during the cold war days of the 1950’s and was part of the multitude of school children who were taught to fear an invasion by our archenemy, the Soviets.

We watched newsreels of the Soviet army preparing to take over America—tanks rumbling down Soviet streets and rows of soldiers marching in lockstep. I could picture their tanks creeping down our streets (an image that became a reality during the 1967 Detroit riots, only they were our tanks and not the Soviet’s).

We also saw newsreels of the bombing of Hiroshima and Nagasaki, the mushroom cloud rising up to the sky, leaving total devastation below.

Regularly, we were marched down to our school basement, a designated bomb shelter, where we would be safe if and when the Soviets attacked.

As we prepared for war with the Soviets, I wondered if our counterparts in the Soviet Union were also watching the newsreels of our bombs falling on Hiroshima and Nagasaki—and being told we were the enemy. I wondered if they, too, were being marched down to the cellars of their schools.

One day, I asked my second grade teacher where my mother and little brother would go if we were attacked by the Soviets. “They will come here,” she said with certainty. Unsatisfactory answer. I knew it would take my mother at least fifteen minutes to walk to our school, and by my calculation, the bombs would have hit the ground by then.

“Why can’t they just go down to our basement?” I asked. Unsatisfactory question, which my teacher clearly did not appreciate. She was the authority and I was to accept her answer as final, whether it made sense to me or not.

How could the school basement be any safer than my home basement? I wondered. Did we only need a fallout shelter sign?

At that early age, I realized that there was more than one way to view a situation and a variety of ways to spin facts.

I made a decision: I neither wanted to live in perpetual fear nor did I want to climb out of the school basement after an atomic bomb had fallen—destroying my home and killing the rest of my family. What was the point in that? Why be kept alive and safe when everything else would be gone?

“I’d rather live under the Soviets,” I told my teacher.

“You don’t know what you are saying,” she replied sharply, as if I had uttered a blasphemy. “They have no food, not even bread.” The thought clearly terrified her.

I didn’t care; I would rather be hungry and have my family than live in constant fear of a Soviet attack. At some place deep within, I already knew that fear was not the answer.

I don’t remember when I first heard the scripture that fear is useless; what is needed is trust (Luke 8:50), but I know I heard it as a confirmation of what I already believed.

©Madeline Bialecki and madelinebialecki.wordpress.com. Unauthorized use and/or duplication of this material without express and written permission from this site’s author is strictly prohibited. Excerpts and links may be used, provided that full and clear credit is given to Madeline Bialecki and madelinebialecki.wordpress.com with appropriate and specific direction to the original content.